It’s time again for another German product round-up!  It’s all foods again, and I think this particular group may be beyond compare.  Let’s see what you think.

There’s a lot happening here.  Let’s talk Currywurst first.  Currywurst, curry sausage, is exactly what it sounds like: a pork sausage, sliced onto a plate, covered in curry sauce, and sprinkled with curry powder.  That’s the basic recipe, but there are many variations.  I have had it with sauce that was more or less ketchup, but last week, I had one that was served whole with sauce that resembled barbecue sauce.  Currywurst originated in former East Germany, but is still very popular.  Currywurst has its own museum now, and Anthony Bourdain tried it in the Berlin episode of No Reservations (cough, bestthingonTV, cough).  Last month, I even saw a machine into which you drop a whole, cooked sausage vertically into the hopper, and slices come shooting out the bottom for no-muss, no-fuss Currywurst.  If you’re picturing the wood chipper scene from Fargo, you’re on the right track.

The new Currywurst Style Chip from funny-frisch takes the beloved flavor of the Currywurst and puts it into chip form.  The premise sounds questionable, especially since we in the USA are so not into making whole meals into potato chips.  I would compare them to a sweet BBQ potato chip.  They are really good, if you are a person who likes potato chips, pork and curry.  If you don’t like these things, what are you even doing in Germany???

Herring Salad with Red Beets is a lot like chicken salad or tuna salad – a creamy, mayonnaise-based salad dressing that holds together cooked meat and crunchy vegetables.  In this case, that meat is herring, and the vegetables are beets, onions and bell peppers, and you spread this product on bread.  Why would I try this?  I am, after all, in northern Germany, and nothing sounds more nordisch than herring.  I know it’s a stereotype, but there is a fish truck that drives around my neighborhood once a week like the ice cream man does at home.  I just wanted to be part of the action. 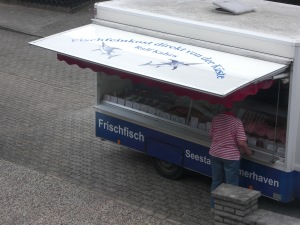 Fish truck from Bremerhaven on the North Sea

It turns out that herring salad is good.  I put a thick layer on half of a Weltmeister roll and enjoyed it for dinner with cold bottle of Pils.  First of all, I am a huge fan of creamy, picnic/pot luck-type fare, so if that’s not your thing, you might not like this salad.  Second, I also love beets and fish, which is probably plays a bigger role in herring salad enjoyment.  Finally, it’s pink, which is just fun.

Herring Salad on a Brötchen

Bärchenwurst - only the best will do for your kids

Now for the big finale.  I’ve been dying to tell the non-German world about this product.  The teacher in me thinks it would be best to begin with a vocabulary lesson.  Bär means “bear” and is pronounced almost the same in German as in English.  The diminutive -chen functions like -ito/-ita in Spanish or –ette in French: it makes things smaller &/or cuter.  Thus, a Bärchen is a cute, little bear.  Wurst means “sausage.”  If we put this all together, we learn that Bärchenwurst means “little bear sausage.” Sausage is second only to beer in the world of German stereotypes, but we Americans have to broaden our concept of “sausage” to understand this product, as well as the German diet.  We all know and love the bratwurst, but things like salami and bologna also fall into the Wurst category.

If you look closely at the package, it tells us that Bärchenwurst is nothing more than good, old-fashioned mortadella.  It is actually mortadella that has been dyed and extruded in such a way that it looks like a panda.  For the uninitiated, mortadella is basically a fattier bologna.  If you’ve been having trouble getting your kids to eat their bologna (assuming this is the type of thing you’d like to encourage), Bärchenwurst to the rescue!  The logic of this product ranks up there with Heinz’s foray into multi-colored ketchups and Nutella ads promising parents that it gets kids to “eat their bread.”

All kidding aside, Bärchenwurst is super tasty.  As a rule, I no longer eat processed meats or foods containing nitrates, but this was not always the case.  Throughout my K-12 career, I almost always bought my lunch at the school cafeteria.  My friends can tell you that I was the only kid who would eat the whole cafeteria lunch.  My overactive guilt complex made eat the gray-green vegetables, but genuine enjoyment made me eat the country fried steak patties, the chicken patties, the hamburgers with the hard bits in them, and the fiestada pizzas.  It’s shameful to admit, but every once in a while, I enjoy a sketchy meat product, whether it’s a chili dog or the cup-shaped, grease-filled pepperoni on a Tony’s frozen pizza.  In Germany, I get to enjoy processed meats under the guise of “cultural immersion,” and I am loving every minute of it!  Physical well-being be damned!  Bärchenwurst is great.

I am a 29 year-old American woman who has received a Fulbright scholarship to work as an English teaching assistant in a German high school.
View all posts by heidihefeweizen →
This entry was posted in German Products and tagged Food, German, Herring, Language, Sausage, Stereotypes. Bookmark the permalink.

Please leave a reply. I'd love to hear from you! Cancel reply