Moin, everyone! It is officially one week until my favorite holiday: Thanksgiving. On Monday, the girls at worked turned to me and said, “We’ve been thinking about it, and we think we should all celebrate Thanksgiving. It’s soon, right?” “Yes,” I replied, somewhat surprised, “It’s next Thursday.” “It’s important, right?” they continued. “Yes,” I said, “It’s probably my favorite holiday.” They all smiled and said “Well, then, we have to do something.” I was so touched. I also think I have had incredible luck with colleagues this year, since they are clearly awesome.

This exchange got me to thinking. What is it about Thanksgiving? What are the traditions? Why is it so enjoyable? I have decided to dedicate my blog entries over the next week to Thanksgiving. For my readers who do not celebrate Thanksgiving, I hope this series of entries will provide you with some insight into the holiday. For those of you who do, maybe it will help you think about your own traditions. I would also love to hear about your own traditions and experiences. Feel free to share!

Photos might not top everyone’s list of Thanksgiving traditions, but if you are in my family, you know what’s happening after dinner: the torture pictures.

In 1993, my mom had the great idea to send out photos of my sisters and me in the Christmas cards. She wanted something that looked cozy and festive. Since we were all wearing our favorite sweaters (I’m not kidding.) for Thanksgiving dinner, that was when the photos happened. Everyone loved the receiving the photographs so much in their Christmas cards, and thus a tradition was born. 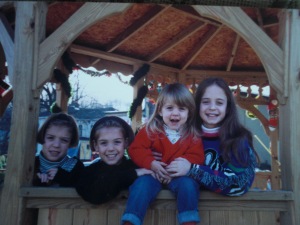 Lauren, Leigh Anne, Heather, me, and my killer sweater!, circa 1993

I was ten years old in this first photo; Leigh Anne and Lauren were nine, and Heather was one and a half. As you can see, my mom timed this perfectly so that every grueling moment of puberty would be captured and distributed to everyone we knew in the years to come. One of my aunts has the photo framed. She simply puts the new one over last year’s photo. If you open the frame, it’s a veritable flip-book of questionable fashions, bad haircuts, experimental make-up and, later, ex-boyfriends.

The photos also serve as a visual archive of how my family has changed over the years. The next seven photos were all taken at my grandmother’s house, which was where we had Thanksgiving dinner every year. After my parents divorced, the setting changed. A few years later, the four of us were lucky to welcome our two step-sisters to the photo, along with reluctant boyfriends, and eventually my nieces and nephews. At that point, we decided to move to a group photo. Some of us are missing from photos, because we have moved too far away or are spending a year abroad. In 2009, we took the first photo without my mother, but with extended family.  We all groan when the cameras appear after dinner, but I think we would all be sad to see the tradition ever stop. 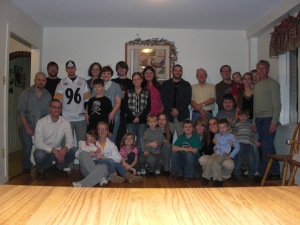 This year, we could have a first: Heather is the only one of us whose entire life has been captured in the Thanksgiving Torture Photos. Her baby is due on November 27th, but if she goes early, we could have the first photo with two full generations in it. It would also be the first ever Thanksgiving photo taken in a birthing center.

I am a 29 year-old American woman who has received a Fulbright scholarship to work as an English teaching assistant in a German high school.
View all posts by heidihefeweizen →
This entry was posted in Thanksgiving and tagged American, Autumn, Family, Holidays, Homesick, Sisters, Thanksgiving, Tradition. Bookmark the permalink.

4 Responses to Thanksgiving #1: The Torture Pictures

Please leave a reply. I'd love to hear from you! Cancel reply